It’s not every day that you get a personal, first-hand connection with the past. But that’s exactly what the aptly-named ‘Living History Lessons’ have provided over the last eight years. Every spring, residents from Clermont Park Life Plan Community, including WWII and Korean War veterans and their civilian counterparts, visit Denver South High School. Together, they share with all the sophomore social studies students about their personal experiences before and during these wars.

Since its inception, more than 20 Clermont Park residents – men and women – have participated in the Living History Lesson program including Herman Moll. 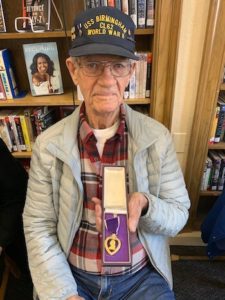 As in many past years, Herman and his fellow Clermont residents were featured in a Denver Post story showing how the Living History Lessons continue to provide students with direct access to the past. This year however, the program also connected Herman with Arvada resident David Buckingham. The common denominator? Both David and Herman’s fathers served on the USS Birmingham.

When David read in the Post about Herman and his service on the USS Birmingham, he immediately contacted the Post reporter, who contacted Clermont’s community relations consultant, who contacted Sales and Marketing Director Heather Hennessee. In just a couple days of his call, Heather was able to facilitate a lunch and sit-down meeting so David could connect with Herman and Herman’s daughters Louis and Laurie.

David’s father was a very private man and never shared what he experienced during the war. Even though he only knew Herman through the newspaper article, David hoped connecting with the veteran might provide insight on his father’s experience.

“The only thing I knew about my father’s service on the Birmingham was that he was in the ‘radio shack,’ the communications tower,” said David. “I used to ask my sisters and my cousins about my dad’s wartime experience, but nobody knew anything. He never talked about it.” 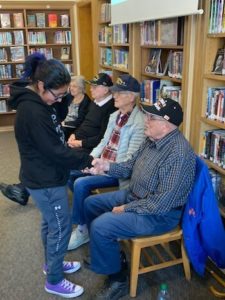 During David’s visit, Herman shared his first-hand experiences on the light cruiser, which provided support to the aircraft carrier USS Princeton at the Battle of Leyte Gulf, the largest naval battle not just in WWII but in history. Herman recalled the events of October 24, the day the Princeton was struck by a single Japanese bomb, the aid the Birmingham provided the crippled carrier and the carnage that ensued.

The Birmingham pulled alongside the carrier to extinguish fire caused by the bomb. Herman was manning a fire hose when the Princeton’s magazine hold exploded, sending flaming shrapnel onto the Birmingham. Herman was knocked out and awoke under the lifeless bodies of thee crewmates. Herman immediately began treating the wounded and praying over those who could not be saved. The explosion killed more than 240 and wounded 408 on the Birmingham, including Herman, who received a Purple Cross for his service.

“I don’t remember his dad personally, but I could tell David about our experiences on the Birmingham,” said Herman. “I was able to tell him what kind of work his dad did and about the things we saw and did.”

According to David, his time with Herman made a profound impact. “The greatest thing I got out of this meeting was that I now understand what my dad went through in the war. I know something about that part of his life. Meeting Herman was kind of like meeting a part of my dad that I never knew.”

Herman’s take on meeting David? “I’m so glad I could shed some light on his dad’s story – I’m and open book and it felt good to tell him about our ship and our lives.”